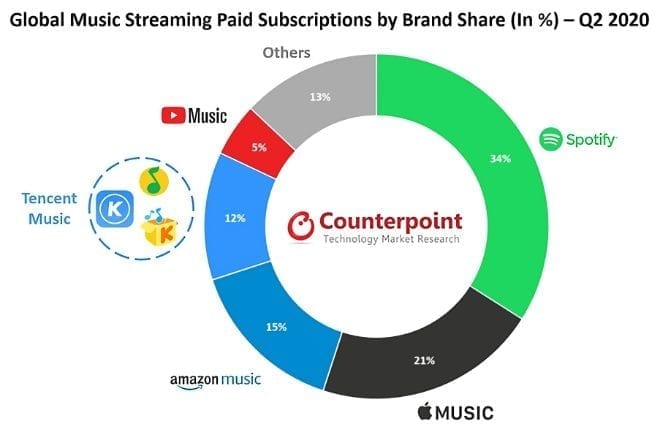 Apple Music took 21% share in paid music subscription market in Q220, As you will see in the image chart below, Counterpoint research finds… Global online music streaming revenues declined 2% QoQ but grew 13% YoY in Q2 2020 at $6.7 billion, according to their latest research. This is the first-ever QoQ decline in terms of revenues as music streaming has been gaining strength with every passing quarter. Paid subscriptions grew 29% YoY compared to 35% YoY in the Q1.

Research Analyst Abhilash Kumar said in a statement, “The growth slowed down in Q2 and, for the first time, the revenues declined sequentially. There are a couple of reasons for the same. The music streaming platforms offered discounts and lowered prices for paid subscriptions to retain consumers or to prevent them from shifting to a free plan. Additionally, advertisement revenues saw a dip since many companies cut expenditures in view of COVID-19. However, podcasts associated with different genres continued to keep people glued, offsetting some of the decline.”

In terms of monthly active users (MAUs), Tencent Music (with its subsidiaries QQ Music, Kuwo, and Kugou) led the chart in Q2 2020 with 26% share, followed by Spotify and YouTube Music with 12% and 10% shares, respectively. However, in terms of paid subscriptions, Spotify continued to lead with 34% share, followed by Apple Music (21%) and Amazon Music (15%).

The music streaming industry was almost immune to the ill-effects of COVID-19 in Q1. In fact, the streaming hours increased as people stayed at home. Starting Q2, the market witnessed a slowdown in growth, driven by a sequential decline in both paid and ad-based revenues. Starting June-end, the growth is slowly coming back on track. We believe the growth will be back to pre-COVID-19 levels by Q4 2020.

MacDailyNews Take: Comparing to Counterpoint’s calendar year 2019, you can see Apple Music is growing and the most rapidly, too:

The best customers are those who pay. As demonstrated by years of data, form disparate sources, those paying customers are also significantly more likely to be iPhone owners than those who’ve settled for poor iPhone facsimiles. A healthy portion of these coveted customers will leave for Apple’s comprehensive offering which grants better family rates, more music, likely exclusives, and seamless integration across all Apple devices. It’ll even work with low-quality Windows PCs and Android phones eventually (not that those are likely to be Spotify’s paying customers, but whatever, some of them will join Apple Music and maybe even graduate to Apple devices because of it).