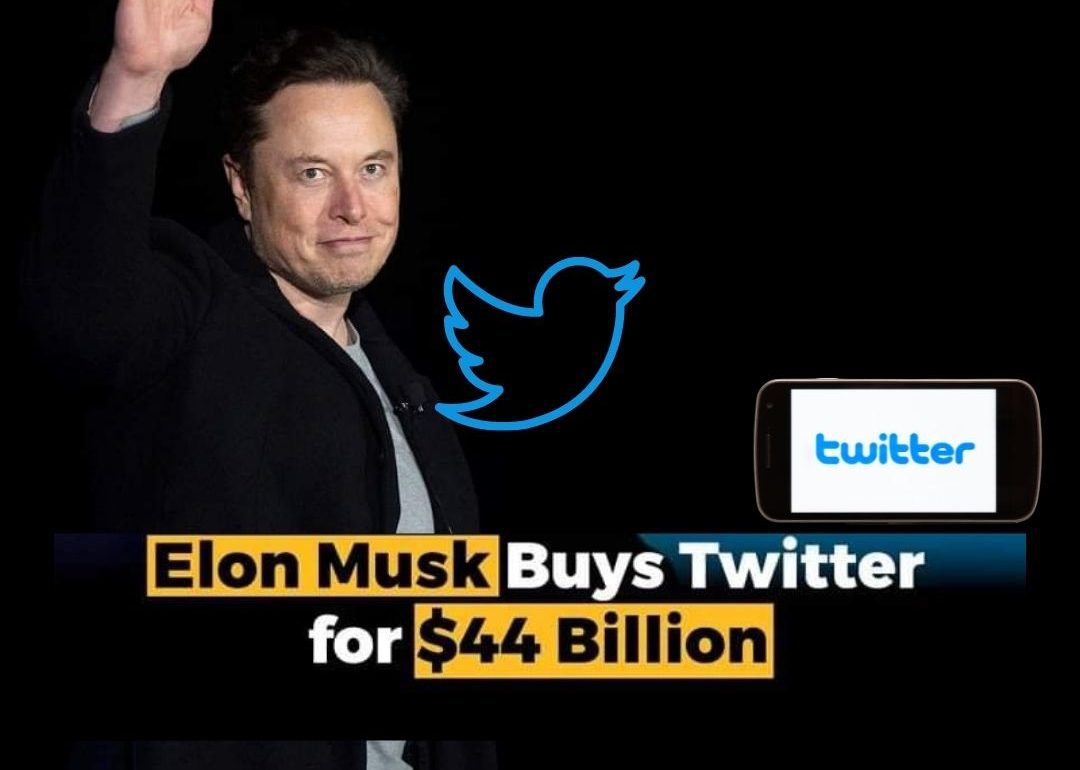 The social media giant confirmed Monday the Tesla CEO and billionaire will acquire the company in a deal worth $44 billion. Once the deal is complete, which is expected by this year, Twitter will become a privately held company.

“Free speech is the bedrock of a functioning democracy, and Twitter is the digital town square where matters vital to the future of humanity are debated,” Musk tweeted to his 84 million followers. “I also want to make Twitter better than ever by enhancing the product with new features, making the algorithms open source to increase trust, defeating the spam bots, and authenticating all humans.”

Shares of Twitter rose more than 5% in afternoon trading Monday.

“Twitter has a purpose and relevance that impacts the entire world,” its CEO Parag Agrawal said in a tweet. “Deeply proud of our teams and inspired by the work that has never been more important.”

The deal comes nearly three months after Musk started buying Twitter shares with his stake growing from 5% to more than 9% and serious overtures that he wanted to control the social media platform. Musk’s acquisition also comes nearly five months after founder and CEO Jack Dorsey stepped aside as CEO and named Agrawal as his replacement.

Late Monday, Dorsey tweeted his approval of Musk’s taking over Twitter, saying he was happy that Twitter will “continue to serve the public conversation” around the world.

While Dorsey said in principle that he doesn’t “believe anyone should own or run Twitter,” as the platform “wants to be a public good at a protocol level, not a company.” But in terms of Twitter being an actual company, Dorsey said Musk is “the singular solution I trust” and as well as Musk’s mission to “extend the light of consciousness.”

“Elon’s goal of creating a platform that is “maximally trusted and broadly inclusive” is the right one. This is also @paraga’s goal, and why I chose him,” Dorsey said. “Thank you both for getting the company out of an impossible situation. This is the right path…I believe it with all my heart.”

Earlier Monday, Musk tweeted, “I hope that even my worst critics remain on Twitter, because that is what free speech means.” The tweet has received more than 1.4 million likes.

Musk has criticized how strictly Twitter moderates content on its platform. “Free speech is essential to a functioning democracy. Do you believe Twitter rigorously adheres to this principle?” he tweeted this month.

Eventually, Musk scooped up that 9% stake in the company earlier this month, which made him one of Twitter’s largest shareholders. Twitter responded by announcing plans to have Musk join its board of directors. That deal would have prevented Musk from owning more than 14.9% of Twitter’s outstanding stock for as long as he’s a board member and for 90 days after.

Days later, Agrawal tweeted that Musk had decided not to join the board. Musk then confirmed, in a regulatory filing,  that he planned to acquire the company.

“I invested in Twitter as I believe in its potential to be the platform for free speech around the globe, and I believe free speech is a societal imperative for a functioning democracy,” Musk said in the proposal. “However, since making my investment I now realize the company will neither thrive nor serve this societal imperative in its current form. Twitter needs to be transformed as a private company.”

Despite its cultural influence, Twitter, with an estimated 416 million weekly users as of April 16, according to data.ai, a mobile data and analytics platform, the platform has lagged behind social media rivals including the Meta-owned Facebook and Instagram, Snapchat and TikTok. Other experts have Twitter at around 200 million users, still far less than TikTok’s 1 billion users, according to Backlinko.com.

“Twitter is a struggling company,” Sara Silver, a business journalism professor at Quinnipiac University, said in a statement. “It lost money the last two years and was only profitable in two of the last five. This contrasts sharply with Facebook owner Meta, Alphabet’s Google, and other highly profitable social media platforms.”

Silver said Twitter’s board had “no choice” but to take Musk’s offer seriously. “With no profits, Twitter could not raise its stock price enough to satisfy investors. This gives a hefty premium to shareholders of at least 35 percent over its price before the offer.”

And despite all of Musk’s boasting about free speech and content moderation, he may have an opportunity to monetize a good product, said Callie Cox, an analyst for eToro, who has more than 25,000 Twitter followers.

“Profitability is what Twitter shareholders have been waiting for. New leadership could provide new thoughts on how to improve and monetize the platform,” said Cox, who considers herself a “power user” on Twitter. “And with such a high stake in the business, he could be under more pressure to perform.”

It’s been widely speculated that, if Musk got control of Twitter and take the platform private, he would reinstate the accounts of certain voices, including former U.S. President Donald Trump.

“I am not going on Twitter, I am going to stay on TRUTH,” Trump told Fox News before Musk’s deal was announced. “I hope Elon buys Twitter because he’ll make improvements to it and he is a good man, but I am going to be staying on TRUTH.”

Trump was suspended permanently not only from Twitter, but also from Facebook, Instagram, and Snapchat following the Capitol riot on Jan. 6, 2021. Twitter banned Trump, citing several of his tweets in connection to the deadly riot as inflammatory and warned of “the risk of further incitement of violence.”

Meanwhile, in the nation’s capital, White House press secretary Jen Psaki said Monday that she would not comment on “a specific transaction” when asked about Musk’s purchase.

“No matter who owns or runs Twitter, the president has long been concerned about the power of large social media platforms – the power they have over our everyday lives,” Psaki said.

She said the president has “long argued that tech platforms must be held accountable for harms they cause” and supports reforms to Section 230, the law that undergirds much of how social media operates in the U.S., and new antitrust reforms to require more transparency.

Psaki declined to say whether the White House has concerns about whether Twitter under Musk’s leadership could reinstate Trump’s Twitter access or lead to the dissemination of more election disinformation.

“At this point, we don’t have any sense of what the policies will look like,” she said.

However, NAACP President Derrick Johnson has a stern message for Musk if he considers letting Trump back on Twitter.

“Do not allow 45 to return to the platform. Do not allow Twitter to become a petri dish for hate speech, or falsehoods that subvert our democracy,” Johnson said in a statement sent to USA TODAY. “Protecting our democracy is of utmost importance, especially as the midterm elections approach. Mr. Musk: lives are at risk, and so is American democracy.”

And Sen. Elizabeth Warren, D-Mass., apparently agrees. She tweeted Monday that Musk’s acquisition of Twitter is “dangerous for our democracy.”

Even Musk’s space rival and fellow billionaire, Amazon and Blue Origin founder Jeff Bezos tweeted something: “Interesting question. Did the Chinese government just gain a bit of leverage over the town square?”

Cox, the eToro analyst, said while she welcomes innovation, as a woman on Twitter, she’s also experienced “a good deal of harassment” and have colleagues who have even received death threats. She hopes Musk will be able to curtail that.

“While one of Twitter’s strengths is the ability to curate, looser content moderation could threaten the safety of minority demographics,” Cox said. “Ultimately, a hostile platform could create a chilling effect on free speech, which is the opposite scenario Elon Musk is angling for.”

Congressman Jim Jordan, R-Ohio, tweeted Monday before Musk’s acquisition, “How crazy will the Left go if they accept his bid?”

Jordan later tweeted after the deal, “Free speech is making a comeback.”

Experts are still trying to figure out what Musk actually wants to do with Twitter.

Wedbush Securities analyst Dan Ives reported on Monday that he thought a deal would get done within the next 24 hours, if not sooner.

“It all came down to no other bidders or white knights emerging in the (Mergers and Acquisitions) process and Twitter’s Board back was against the wall once Musk detailed his $46 billion in financing last week to get pen to paper on this deal,” Ives said. “We do not expect any major regulatory hurdles to the deal getting done as this soap opera now ends with Musk owning Twitter.”

Ives added that the Twitter board bought some extra time with the “poison pill” but ultimately had to get to the negotiation table with Musk to get this deal done as “the clock struck midnight on Twitter’s history as a public company.”

Scott Kessler, global sector lead for technology media at Third Bridge, said in a statement that “it seems that major changes are ahead for Twitter if Musk succeeds, but the specifics at this point are pretty lacking.

“Musk has tweeted about the importance of free speech and an ‘edit button,’” Kessler added. “He wants people with big Twitter followings to become more active on the platform. He favors monetization through subscriptions versus advertising.”

Angelo Carusone, the president of Media Matters for America, a politically left-leaning nonprofit media watchdog group, said in a statement that Musk buying Twitter would be “a victory for disinformation and the people who peddle it.”

Carusone believes that Musk could “unleash a wave of toxicity and harassment” and undo Twitter’s efforts to increase quality engagement and attempts to make the platform safer for users.

“Handing Musk the reins to Twitter will undoubtedly unleash the conspiracy theories that the platform has attempted to squelch, and any attempt to use the platform for legitimate information sharing will be overshadowed by a toxic cesspool of misinformation,” Carusone said.

He added, “The only thing worse than Twitter re-platforming the likes of Donald Trump and Alex Jones – as well as reversing course in dealing with disinformation and extremists – is the perverse pressure it’ll create on other major social media platforms, effectively igniting a race to the bottom.”