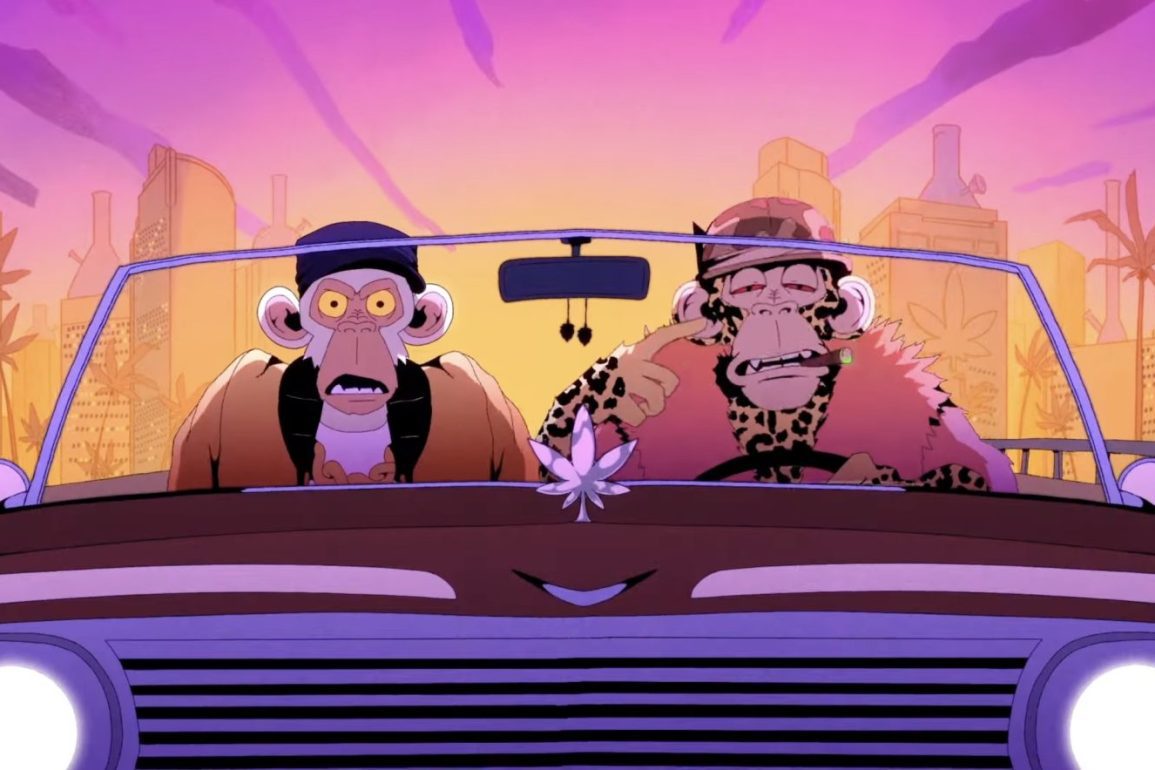 The song is a stoner song delivered with his speedy lyrics as expected by Eminem and surprisingly Snoop comes with his fast bars; both giving their hometowns shout-out reppin’ Detroit and Long Beach via area code!

James Larese-directed this music video that begins with Eminem and Snoop in the studio, with the latter professing there’s “no smoke in here” despite the visible presence of an enormous blunt.

The video shows Em and Snoop perform their respective verses while transforming into animated Bored Ape avatars (NFTs ) making it a commercial promotion for the Bored Ape Yacht Club. Both Snoop and Eminem are members of the club, with the former releasing an EDM single called “BAYC” about the venture earlier this year that sounds like a tourist club in Prague. the duo recently the track live while appearing at Ape Fest 2022.

The new single shares the vibes and virtues of smoking weed — so much weed, in fact, the video was made from a recording-studio smoke session and blended in a creation of animation as we see.

Feast your eyes on these bars from Eminem, paying particular attention to the ad-libs in parentheses:

Always got that bomb weed (That’s why)

I feel a calm breeze (Yeah)

Every time I palm trees (Get it?), just like that blonde bleach

Every time I palm trees. Get it?

They should head to CVS instead — if you have the ExtraCare subscription, you get 20 percent off all CVS Health brand items. That goes for redness-relieving eye drops too. #NotAnAd.

’Cause dope is addictive, just like they call it mari-ju-ana

Whenever I see the phrase “marry Jane,” I think of “Mary Jane,” the Rick James song. When I was singing it in the backseat of my mom’s white minivan in like 2001, I didn’t know I was talking about pot. (I was 5.)

By admin
In Original Song Tracks

So put your doobies high if you reside in 213, let’s see them blunts raised (Brr)

Whether you east side or west side of the 313, let’s see them guns blaze

I’m glad I reside in neither of those area codes because this is most definitely my nightmare blunt rotation. Brr.

It makes sense that Eminem and Snoop Dogg would team up for an NFT-inspired music video of a what some opinionate into a laughably corny song full of throwbacks that any ’80s and ’90s baby can relate to.. However, the crypto market seems to be bottoming out, so this may be their best bet; to sell those digital tokens to people who probably used to pin stoner quotes to their Pinterest boards or even new buyers just now getting involved with NFTs around the music from the Legends they love.

Interesting enough, there was a feud between Eminem and Snoop Dogg back and 2020 which was then squashed. Now they are collabing tough here in 2022. Everyone who has been following the news of Eminem and Snoop Dogg knows about this and is not surprised to see more content with the two rap stars, especially since the feud is over. Maybe it was a marketing trick all along!?!