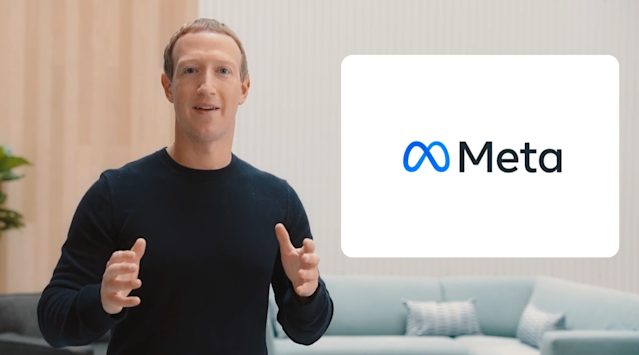 OAKLAND — Facebook CEO Mark Zuckerberg announced his company is rebranding itself as Meta in an effort to encompass its virtual-reality vision for the future, what Zuckerberg calls the “metaverse.”

Our brand is so tightly linked to one product that it can’t possibly represent everything that we’re doing today, let alone in the future,

From now on, we’re going to be metaverse-first, not Facebook first.

Today we are seen as a social media company, but in our DNA we are a company that builds technology to connect people.

Zuckerberg announced the new name during a virtual (meta-virtual?) keynote for the company’s Connect event. Under its new arrangement, Facebook and its “family of apps” will be a division of the larger Meta company, which will still be led my Zuckerberg.

The restructuring shows some similarities to when Google restructured itself into Alphabet, the holding company that now operates Google, along with its “other bets” like DeepMind and Nest. Facebook previously said it plans to separate Facebook Reality Labs, its AR and VR group, from the rest of the company when reporting its financial performance. In a new statement it added that its”corporate structure” won’t be changing. The company is also changing its stock ticker from FB to MVRS beginning in December.

The company is positioning the name as more reflective of its future ambitions to evolve from social network to metaverse company. Zuckerberg is still defining exactly what being a “metaverse company” means for its main platform and users, but augmented and virtual reality is central to the vision. The company has already shown off an early version of one project, called Horizon Workrooms, that allows people to conduct meetings in VR. The company also previewed new “Horizon Home” and “Horizon Venues” experiences. (All of the company’s social VR products will fall under the larger “Meta Horizon” brand, according to a post from incoming CTO Andrew Bosworth.) And, earlier this month, the company announced plans to hire 10,000 new workers in Europe in order to build out its metaverse.

The announcement comes amid an existential crisis for Facebook. It faces legislative and regulatory scrutiny in many parts of the world following revelations in the Facebook Papers.

So yes, the name change comes at one of the most precarious moments in the company’s history. The social network is reeling from the fallout of the “Facebook Papers,” a trove of internal documents collected by a former employee turned whistleblower. The documents have been the basis for a series of complaints to the Securities and Exchange Commission, as well as the source of more than a dozen reports about the company’s failings to stem the tide of misinformation, hate speech and other harms caused by the platform.

Again, in other words… Skeptics point out that it appears to be an attempt to change the subject from the Facebook Papers, a leaked document trove that has revealed the ways Facebook ignored internal reports and warnings of the harms its social network created or magnified across the world. Basically meaning, to avoid the privacy drama they are currently dealing with from the courts and the people. This seems to be their way out of many issues, hence adapting a new start with Meta with their plans to innovate a new privacy under Meta Universe.

The new name also means that the iconic Facebook “thumbs up” will no longer be the company’s official logo or on the signage at its headquarters. (Incidentally, the role of “likes” and other reactions in enabling hate and anger on Facebook has been a central narrative of the Facebook Papers disclosures.) In a blog post about the design of the new name and logo, the company said the new logo was optimized for 3D experiences and “designed to be experienced from different perspectives and interacted with.”

It’s worth noting that the new name doesn’t change anything for the main Facebook, Instagram, Messenger and WhatsApp services, which will be known by their existing names. But the services could get more metaverse-oriented experiences with time. Instagram chief Adam Mosseri said that users could expect “a more immersive Instagram experience in the metaverse.” Bosworth also notes that some “relevant products and services” would be rebranded as well, such as the Portal lineup, which will eventually take on “Meta Portal” branding. The company also plans to “retire” the Oculus name, with the VR products taking on the Meta identity.

Zuckerberg says he expects the metaverse to reach a billion people within the next decade. The metaverse, he says, will be a place people will be able to interact, work and create products and content in what he hopes will be a new ecosystem that creates “millions” of jobs for creators.

In explaining the rebrand, Zuckerberg said the name

Facebook” just doesn’t encompass “everything we do” any more.

In addition to its primary social network, that now includes Instagram, Messenger, its Quest VR headset, its Horizon VR platform and more.

YouTube Changes Terms: YouTube’s Right To Monetize With Ads on Channels That Aren’t Part of Its Revenue-Sharing Program

By admin
In Featured BlogsSoftwareTechnology & Insights

Meta will change the game. I have been talking about virtual reality social since 2013. The technology now has improved and can now be implemented by a leading social platform such as Facebook. With it’s rebranding and new interfaces built for virtual social environments, this may be the game changer they needed.
Say goodbye to #Facebook soon and hello #Meta inside #MetaVerse

He also addressed the lack of the younger demographics on Facebook as we have seen reports of the decrease in younger aged users since 2019 and currently now in 2021.

Younger demographics are already use to virtual reality through their gaming and seem to have proven it to be an attractive entertainment and social interactive gateway to their friends and other gamers, so it only makes sense that a new Meta Universe will be of high interest and convert or bring back younger people. Older people will also be attracted as they will see a value in virtual reality being a good tool to be not only closer in their personal lives with family but in their business life with e-commerce etc. Yes, Eccomerce will be implemented. 🥽🪙🛒

He went on to say…

Imagine being able to walk in to an online virtual store and try on an outfit according to your saved portfolio data and then make a purchase only to have the delivery show up the next day through something like Amazon, FedEx or UPS. Imagine going to a bar to have a drink with your friend but and you can totally see each other but you’re really at home drinking your own drink… Not feeling like such an alcoholic now huh lol?
I’m sure they’ll be regulations around the virtual reality meta universe as I am just throwing out ideas which are the same ideas I’ve had for almost a decade now. It will take a lot of time, money, dedication, and learning but if someone is going to do it it will be Facebook.
They already bought out Instagram and WhatsApp and tried to dip into the TikTok Market by buying out Snapchat but that didn’t work, so now rebranding into Meta for a Meta Universe for social. It may just be the next innovative thing that brings the younger and order crowds together since Facebook (soon to be Meta) has the power to connect the world on this virtual level.