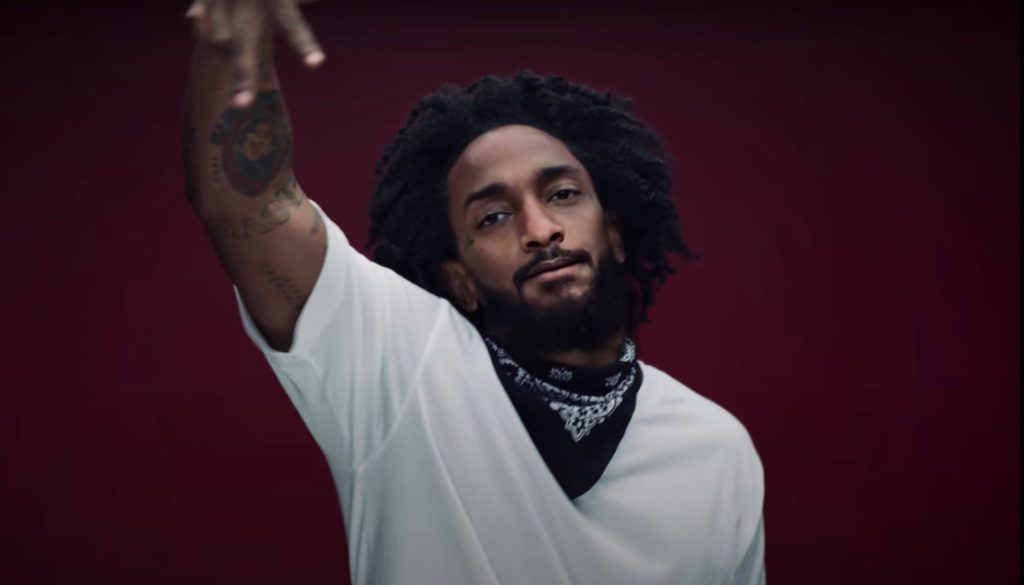 Kendrick Lamar dropped his first new solo single in nearly four years on Sunday night, called “The Heart Part 5.” comes to us before the long-awaited release of his fifth solo album, “Mr. Morale & the Big Steppers” announced to arrive on May 13. According to his social posts.

The new song went public and viral for 24 hours more or less before it was made private or removed. The embed shows no video but plenty of online reviewers have their copies up with their feedback, and those haven’t been taken down as of yet.

The video begins with Lamar rapping by himself in front of a red screen, but occasionally has the faces of other rappers, and controversial or deceased Black men photoshopped over his: Kanye West, Will Smith, Kobe Bryant, OJ Simpson, Jussie Smollett and finally Nipsey Hussle.

The video, which was directed by Lamar and longtime collaborator Dave Free, opens with a written statement — “I am. All of us,” attributed to “Oklama,” a name Lamar has been using in his recent cryptic announcements about the album — which could be interpreted to be a statement about the faces that are superimposed over his in the video.

The song’s lyrics flow quick with conviction — Make sure to check Genius.com for the breakdown on what Kendrick said— but the faces seem to have direct connections to lyrics he delivers: West’s appears during a reference to a “friend’s bipolar,” Simpson’s references a “bulletproof rover,” and Hussle’s takes the form of a long soliloquy that closes out the song, and obviously from the perspective of the late L.A. rapper, who was murdered in 2019 and was a close friend of Lamar’s.

“To my brother, to my kids I’m in heaven … To the killer that sped up my demise: I forgive you, just know your soul’s in question/ I seen the pain in your pupil when that trigger had squeezed/ And though you did me gruesome, I was surely relieved/ I completed my mission, wasn’t ready to leave/ But fulfilled my days, my Creator was pleased … To my neighborhood, let the good prevail … I can’t blame the hood the day that I was killed.”

The song opens up with a spoken introduction by Lamar thanking “everyone who’s been down with me, all my fans, all my beautiful fans” before he bursts into rapid-fire rapping over a jazzy musical backing that turns into ’70s soul for the chorus and has an inspirational vibe sure to leave goosebumps.

The song in “The Heart Part 5” is the latest in Lamar’s ongoing series called “The Heart,” reaching back to 2010.

“The following statement was released today by oklama, through his company pgLang at 11:00 a.m. PT in Los Angeles, CA:

Lamar unveiled the long-awaited “Mr. Morale & the Big Steppers” album last month via social. Responding to an earlier tweet from SK that says, “Kendrick Lamar is officially retired,” the rap titan responded with a link: oklama.com, which leads to a note that reads:

Spotify Warns & Reminds Us How Bots & Paying For Streaming Services Hurts Your MONETIZATION and MUSIC CAREER!

All factual information for this release will come directly from this source only.”

Kendrick Lamar’s last full-length project was 2017’s Grammy-winning “DAMN,” which was released just two days before his headlining Coachella set, also led to his Pulitzer Prize and made him the honoree at Variety’s inaugural Hitmakers event.

He followed a year later by curating and contributing several songs to the “Black Panther” soundtrack, including his duet with SZA, “All the Stars.” In 2021, he featured on two songs from his cousin Baby Keem’s latest album — “Range Brothers” and the Grammy-winning “Family Ties” — although those appearances just seemed to spark high and excited energy ultimately making his fan base even more impatient.

There have even been several false alarms, such as a social media frenzy ignited last summer by his record label TDE, but that turned out to be a tease for the Isaiah Rashad album. As several fans pointed out on social media, Lamar announced his long-awaited new album via a minimalist fax page similar to the one Michael Jordan put out in March 1995 to announce he was ending his retirement and returning to the NBA.

What are your thoughts on Kendrick and his new song? Are you ready for the album May 13th, 2022?

Listen to the full album on Spotify –Mr. Morale & The Big Steppers – Album by Kendrick Lamar