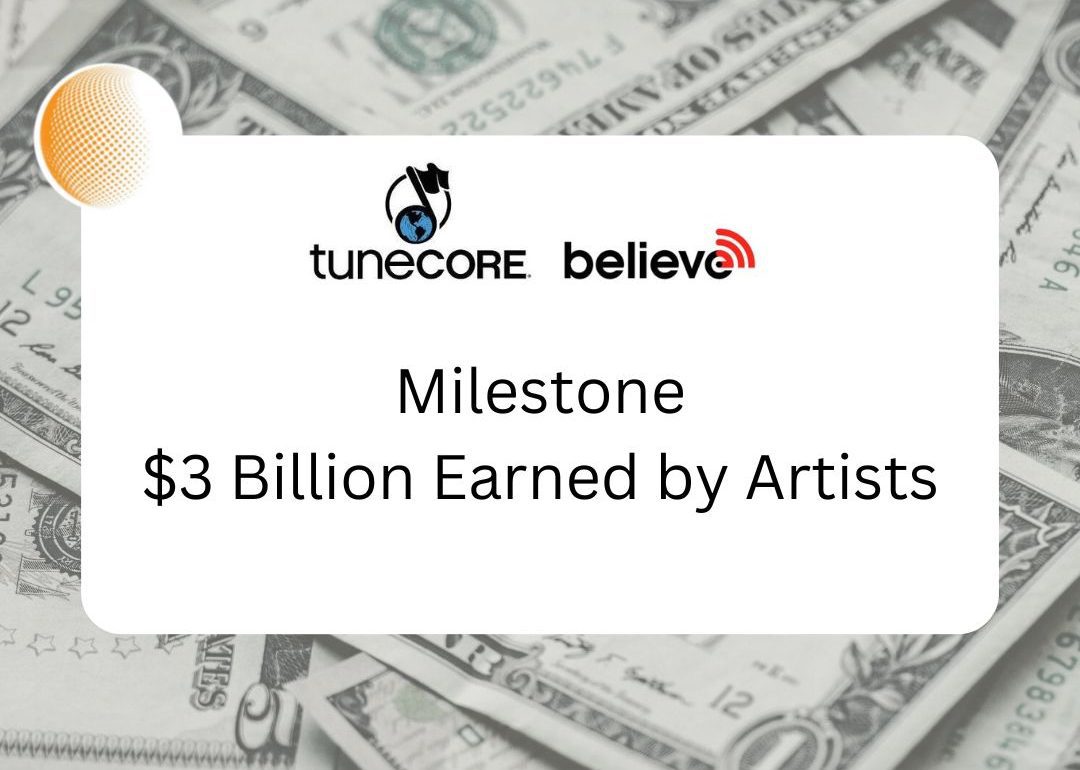 TUNECORE’S DIY (Do It Yourself) ARTISTS ARE MAKING PROFITS, $3 BILLION WORTH!

NEW YORK, December 8, 2022 – TuneCore, the leading independent development partner for self-releasing DIY Independent artists, has achieved the milestone of $3 billion earned by artists (since the company was founded in 2006), reinforcing its status as the world’s highest paying distribution service for self-releasing artists. TuneCore is owned by Believe, one of the world’s leading digital music companies.

Since the $3 billion figure represents a cumulative earnings total count from all TuneCore music creators – including independent artists ranging from hobbyists and nascent music creators and of course the working professionals and even accomplished mainstream artists – the potential for success through an independent distributor has never been greater, with over 8,000 TuneCore artists earning over $10,000, thousands of artists earning between $50,000 and $100,000 and many taking home over $1,000,000. This record breaking payout to artists is provided by TuneCore’s direct deals with all DSPs (digital service providers) in the marketplace. It signifies how TuneCore differentiate themselves and it surly helps now that their new pricing has changed for unlimited releases. Things are working out well for everyone in the Tunecore circle. The company also offers additional revenue streams for its artists via its Social Platforms and YouTube Content ID programs, with TuneCore’s music publishing division having paid artists close to $90,000,000 (since the launch of TuneCore Music Publishing Administration in 2011). By offering a wide array of resources to aid music creators at all stages of their careers, TuneCore has created a true platform where artists receive world-class distribution services and the support structure for long-term career growth.

Self-releasing – DIY independent artists represent the fastest growing segment of the global music market, with all self-releasing artists growing from 1.7% of overall market share in 2015 to 5.3% in 2021 (source: MIDiA Research).

TuneCore is essential to Believe’s overarching mission, as well as key to the Group’s ecosystem, which is designed to support a wide range of artists at all stages of their careers, and across all demographics. The achievement of reaching $3 billion earned by self-releasing artists speaks volumes to the importance of supporting all creators equally. Which is why the whole artistic community must be nurtured without differentiation to allow the emergence of a new class of self-releasing artists that will be able to sustain themselves by making a living from their art. Not all artists aim at becoming superstars, but all top artists need a launchpad to blossom.

With the latest count, over 400 TuneCore artists have been upstreamed to Believe’s premium services levels, Label and Artist Solutions (LAS) as well as Artist Services (AS). By strengthening the connections between Believe and TuneCore, the Group has created an offering that fits artists’ needs at all stages of their development, and has created an environment where music creators have the freedom to experiment with all music genres – from traditional to progressive hybrid styles. Italy’s La Sad is a brilliant example of this, with three solo acts from different backgrounds and genres, coming together to introduce a new sound for that market through TuneCore, and eventually upstreaming to Believe.

We’re proud to offer innovative technology-based services at affordable price points to all music creators, whether you’re a beginner or a top artist. Ed Sheeran, Lizzo, and Chance the Rapper all started their careers on TuneCore – in fact, the next Ed Sheeran, the next Lizzo and the next Chance could all very well be on our roster right now. Our goal is to give all self-releasing artists the freedom to create, test, perfect – and earn money from – their music, without restrictions. When you foster a space where creativity flows, artists are able to push boundaries and that’s where innovation lives – artists collaborating to create new music, new sounds, and new genres.

TuneCore and many of its artists share a passionately independent spirit. According to resources like Yahoo, Atlanta-born, Los Angeles-based R&B artist Tanerélle started her career in 2015 with the electro/dance-pop single “Siren” and has been gaining recognition ever since for her unique style of R&B that blends the hazy production of lo-fi hip-hop with lush soundscapes into an expressive, otherworldly style fitting of her Mama Saturn alter-ego. She has amassed more than 70 million streams on Spotify alone, has garnered media praise from major media outlets including MTV, Paper Magazine, Vibe & more, and her music has been featured on Spike Lee’s She’s Gotta Have It, Issa Rae’s Insecure & more, all without the support of the traditional label system. “Being an independent artist has allowed me to evolve as a creative, a woman and an activist,” says Tanerélle. “It has allowed me to feel limitless and in control of my own voice and my own destiny. It’s more than anyone could ask for of this craft.”

One artist from the new generation of artists who chose to retain control of her career and build her own team as an independent TuneCore artist, is country music sensation Maggie Baugh. Nashville-based country artist Maggie Baugh initially signed to a record label when she was just a teenager and before carving a path for herself as a self-releasing Independent artist. In 2021, her singles “Drinking To The Broken Hearts” and “Think About Me,” released through TuneCore, amassed over one million streams each on Spotify alone, and Baugh found herself repeatedly turning down label offers as her music went viral on social media. She has gained media praise from People Magazine as well as American Songwriter, Taste of Country & more, and “Think About Me” closed out the year as number one on Spotify’s Fresh Finds Country: Best of 2021 playlist. Baugh commented, “As an independent artist, we work hours upon hours to achieve our goals and dreams. We eat, breathe and sleep our careers. Of course, no one should work harder than the artist, but there is something to be said about having a fantastic team and a group of people behind you. I continue to stay independent after success because I want to find the right group of people who genuinely have my best interest at heart, who are willing to work their tails off with me, and are excited about what I’ve got going on as an artist.”

Since TuneCore has continued to grow, so has the company’s international artist roster. As a result, artists around the world have opted to embrace careers as self-releasing artists. 34% of artists who generated more than $10,000 on Spotify live in countries outside the top ten music markets (source: Spotify) and  TuneCore’s creators outside the US have grown to represent 60% of its new artists and labels. In Italy, renown rapper Vacca, known for his high-profile collaborations with artists like Styles P, previously released albums through EMI (2007’s Faccio quello che voglio), UMG (2010’s Sporco, 2011’s Pelleossa, 2013’s Pazienza), and Sony Music (2015’s L’ultimo tango), before ultimately turning away from the traditional label system and returning to his independent roots. Vacca commented, “The best moments of my career were when substantial income began to come from my catalog. At that time I began to really understand the greatness of TuneCore and the opportunity it was giving us independent artists. Because of TuneCore, we’re able to directly manage our projects, our art, and consequently also our life.”

Earlier this year, to further democratize the music industry for self-releasing artists, TuneCore unveiled its new UNLIMITED pricing structure, as mentioned above. This was introduced earlier in the year – 2022 – giving artists the power to release an unlimited number of singles and albums for one flat annual rate and allowing them to create more music and experiment with different release strategies; Artists can then advance their careers and feed their growing fanbases. Amazingly enough, in November 2021, TuneCore also launched Social Platforms, which allows artists to upload their music—for no upfront cost—directly into the music libraries of social media platforms like TikTok, YouTube Shorts, Facebook and Instagram stories and Reels, where they are able to gain exposure while simultaneously earning money from their music.

With Tunecore providing an open platform, accessible technology solution for self-releasing artists to widely distribute and earn money from their music; Believe and TuneCore have helped to create a more sustainable and healthy industry to cover the entire process of music release and artists can have the right ecosystem at all stages of their careers to meet their ambitions. The coexistence of these two companies and their consistent efforts has proven innovation and value since it’s creation in 2005. Their goal to democratize the music business is alive and kickin’, as they continue to reduce industry gatekeeping and provide education and distribution resources for artists at every stage of their development, Believe and TuneCore continue to work towards creating a more equitable and diverse music ecosystem around the global world.

About Believe:
Believe is one of the world’s leading digital music companies. Believe’s mission is to develop local artists and labels in the digital ecosystem by providing them the solutions they need to grow their audience at each stage of their career and development. Believe’s passionate team of digital music experts around the world leverages the Group’s global technology platform to advise artists and labels, distribute and promote their music. Its 1,610 employees in more than 50 countries aim to support local artists and labels with a unique digital expertise, respect, fairness and transparency. Believe offers its various solutions through a portfolio of brands including TuneCore, Nuclear Blast, Naïve, Groove Attack and AllPoints. Believe is listed on compartment A of the regulated market of Euronext Paris (Ticker: BLV, ISIN: FR0014003FE9). www.believe.com

About TuneCore:
TuneCore is the leading independent development partner for self-releasing artists to build audiences and careers – with technology and services across distribution, publishing administration, and a range of promotional services. TuneCore Music Distribution services help artists, labels, and managers sell their music through Spotify, Apple Music, Amazon Music, Deezer, TikTok, Tencent, and more than 150 download and streaming stores worldwide, while retaining 100 percent of their sales revenue and rights for a low annual flat fee. TuneCore Music Publishing Administration assists songwriters by administering their compositions through licensing, registration, worldwide royalty collections, and placement opportunities in film, TV, commercials, video games, and more. The TuneCore Artist Services portal offers a suite of tools and services that enable artists to promote their craft, connect with fans, and get their music heard. TuneCore, part of Believe, is headquartered in Brooklyn, NY, with offices in Los Angeles, Nashville, and Atlanta, and operates globally through local teams based in the UK, Germany, France, Belgium, The Netherlands, Italy, Brazil, Mexico, Nigeria, South Africa, India, Japan, Indonesia, Thailand, Philippines and Singapore across 5 continents. www.tunecore.com

Remember once you Get all your music on all the DSPs It then will be time to leverage that on your KinerkTube Artist and Business pages on the map as well as in and outside KinerkTube.com social music network. ??️